The “tail” of a particle size distribution refers to particles several standard deviations from the mean of the standard Gaussian distribution.

These particles are often overlooked or misinterpreted by conventional light scattering particle sizing techniques. Although the word “tail” can be used to describe fine or course particles it is most often used to describe the course outliers in a PSD. These particles often manifest in a shift of the primary PSD and result in a larger mean diameter. Such shifts produce a result not representative of the true particle size distribution of a sample. The single particle optical sensing (SPOS) technique is ideal for the measurement of distribution “tails”. This technique enables the user to count and size particles >0.5 microns with high resolution and accuracy. By measuring the distribution tail a user can acquire information such as whether or not an emulsion is stable or if a CMP slurry will cause damage to the silicon wafers it is used to polish. Figure 1 shows the PSDs for two pharmaceutical emulsions. The efficacy of these emulsions is monitored by USPwhich requires that the volume (%) of particles greater than 5 microns be determined by a single particle counting technique such as SPOS. These two emulsions have roughly the same mean diameter and would be indistinguishable using light scattering techniques. Analysis of the distribution tails by SPOS reveals that the “unstable” emulsion contains many more particles greater than 5 microns than the “stable” emulsion. 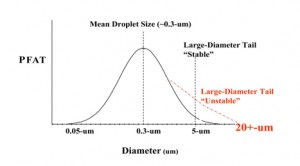 Figure A Diagram of a stable and unstable emulsion highlighting the difference in large-diameter droplet tails.