Emulsions are two phase dispersion of liquids that are normally not miscible. The most common examples are oil in water and water in oil. The particle size and zeta potential of the emulsion droplets are important physical characteristics that influence emulsion stability.

Droplet size can be measured on either the Nicomp® DLS system or the AccuSizer® SPOS system. The Nicomp system can also measure the zeta potential during the formulation, which optimizes the surface chemistry and dispersion stability.

An emulsion is usually comprised of two or more immiscible liquids where one liquid in the form of droplets is dispersed (the dispersed phase) in another liquid (the continuous phase).

The surface of each droplet is an interface between hydrophilic and hydrophobic molecules and therefore thermodynamically unstable. The stability of an emulsion can also be affected by many external factors including storage methods (glass vs. plastic), time, and temperature. Light scattering techniques are the norm for determining the particle size distributions of emulsions. Oftentimes an emulsion that has become unstable will produce a shift in mean diameter of a light scattering PSD. However, the size and quantity of the particles, which cause instability, cannot be determined using these techniques.

This detail becomes extremely important when dealing with injectable fat emulsions. The coalescence of fat globules in intravenous lipid emulsions (IVLEs) can cause pulmonary embolisms in small blood vessels with diameters ranging between 4 and 9 µm and in larger blood vessels that have diameters ~20 µm. Therefore, the US Pharmacopeia contains a number of particle sizing procedures such as USP <788> and <729>. USP <729> requires that the mean droplet size as well as the extent of the large-diameter droplet tail (> 5 µm) be determined. The volume weighted percent of PFAT5 (percentage of fat greater than 5 µm) must not exceed 0.05%. 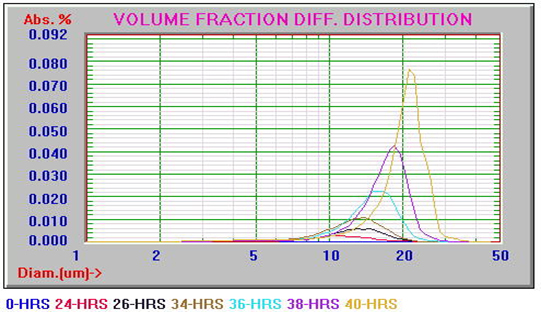 Globule size distribution of a lipid emulsion after heat stress for 0 - 40 hours measured on the AccuSizer.

A single particle counting technique such as SPOS is required to determine the PFAT5 in emulsions. For many years the AccuSizer line of instruments has been the premier instrument for this determination. The figure above shows the volume-weighted distribution of an emulsion that has become increasingly unstable over time.

Particle size analysis has always played a large and important role in ensuring the safety and effectiveness of all sorts of pharmaceutical preparations.

The US Pharmacopeia contains several particle sizing procedures with drug safety in mind including USP <788> and USP <729>. USP <729> requires that the mean droplet size as well as the extent of the large-diameter droplet tail (> 5 µm) be determined. Conventionally, a method such as dynamic light scattering would be used to determine the mean droplet size and a light obscuration technique would be used to analyze the large-diameter droplet tail. It has been found that by using the FX-Nano system, which uses focused beam light obscuration, it is possible to determine both the mean diameter and large-diameter droplet tail using one characterization technique. This is the first single instrument that would satisfy the requirements for USP <729>.

The new focused light obscuration technique extends the lower limit of SPOS technology from 0.5 µm down to 0.15 µm whereby it is now possible to define the primary distribution and also provide count information in the tail of pharmaceutical emulsions. In addition, by focusing the beam of detection to a fine point, particles can be sized and counted at concentrations up to 106 particles/mL. Presently, no other available technique can provide both sets of information. In this study, the focused beam system is used to count and size the primary distribution and large-diameter droplet tail of emulsions and determine their viability according to USP <729>.

Figure A shows a representative FX-Nano system histogram result of a TPN. Not only was the mean droplet size determined but also the large-diameter droplet tail.

Figure B shows a comparison of three TPNs with mean diameters of between 0.3-0.35 µm. From this data emulsion instability can be predicted. Sample LN clearly shows an increase in oversized particles due to coalescence. 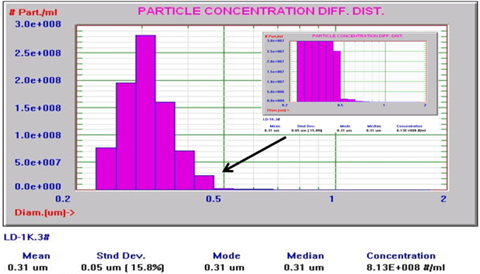 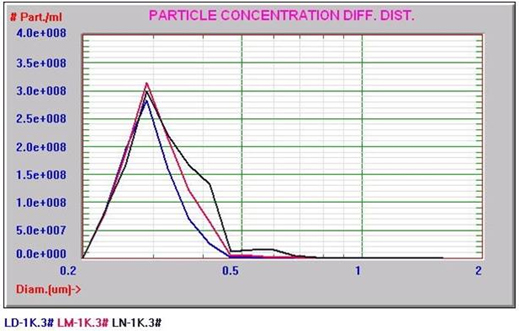 Flavoring emulsions used in the production of bottled soft drinks must consist of droplets of uniform size that are small enough to prevent agglomeration or Ostwald ripening, both of which can result in the “breaking” of the emulsion and formation of a cosmetically undesirable “neck ring” inside the bottle. Since the process leading up to the neck ring is gradual, it can be detected in its early stages.

The droplet size distribution measurements of flavoring emulsions is one predictor used to avoid phase separation and neck ring formation. Of the various techniques available for measuring the droplet size of emulsions single particle optical sizing is uniquely capable of detecting the presence of over-sized outliers in the tail of an emulsion distribution.

The droplet size distributions of several flavoring emulsions used for soft drinks are shown in the figure. Obvious differences in the amount and size of the over-sized particles can be seen. The percent greater than 1 µm can be used to quantify the quality of the emulsion for use in a soft drink and to predict the eventual presence of a neck ring. The AccuSizer A2000 system is used in emulsion labs around the world to determine the droplet size of these flavor emulsions. 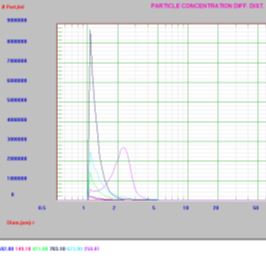