Zeta Potential is the electric potential at the shear plane of a particle. Particles within a colloidal dispersion carry charges that contribute to the net charge of a particle. Each particle is surrounded by oppositely charged ions in what is called a fixed or stern layer. Beyond the fixed layer there are both positive and negative ions in what can be considered a charge “cloud”. These along with the ions in the stern layer form the electrical double layer at the particle-liquid interface. The ions within the charge cloud or “diffuse” region move about freely becoming less and less further away from the particle and eventually decay to zero. The potential at the boundary of the stern plane and the diffuse (shear) plane is known as the zeta potential. 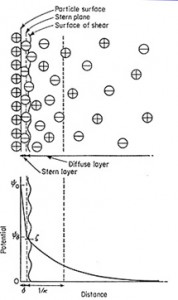